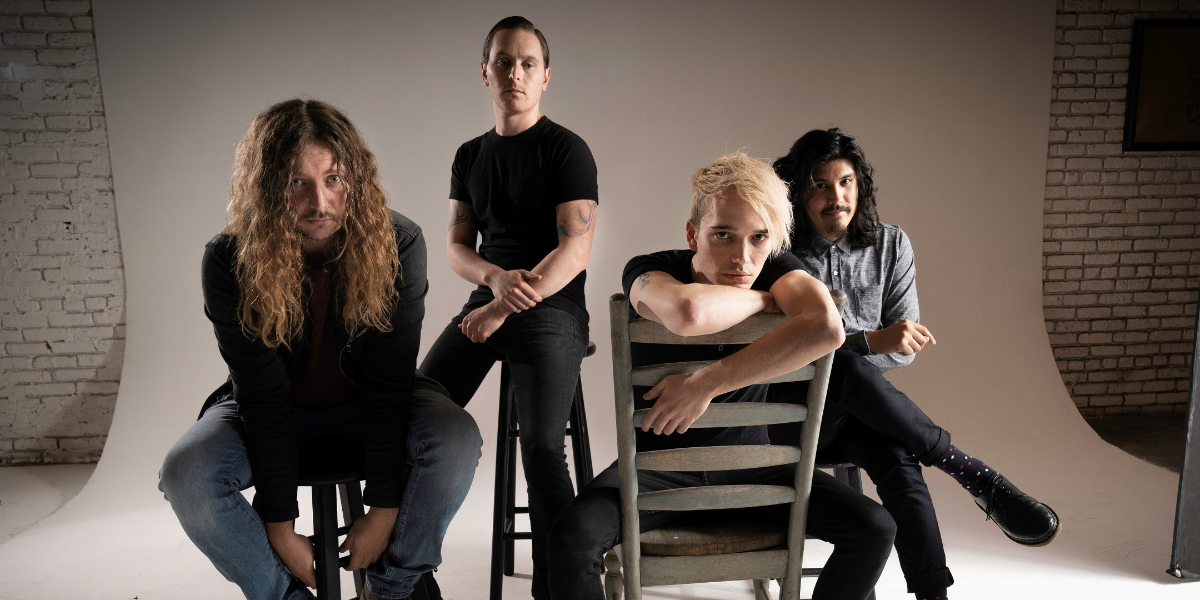 Get adv tickets starting Friday November 8th at 10am at www.soulkitchenmobile.com or by calling 866.777.8932 or at Mellow Mushrooms (USA location). 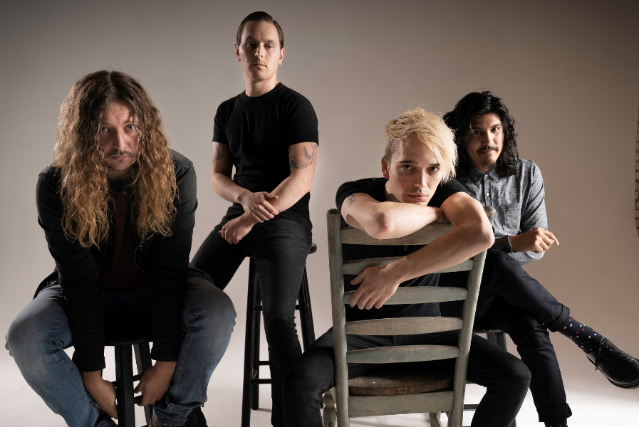 That attitude might seem misguided for a band who have yet to release their debut album. In this age where music’s money comes largely from touring, fans are more important than ever - they’re the ones who buy the tickets to shows and ultimately give artists the opportunity to keep playing and progressing. But the LA four-piece aren’t complete beginners - since forming in 2013, frontman Josh Katz, guitarist Joey Morrow, drummer Anthony Sonetti, and bassist Alex Espiritu have toured relentlessly across the US and beyond, building up a reputation as a formidable live force as well as an ever-growing mass of loyal followers and praise from the likes of Billboard, Forbes, and Consequence Of Sound.

Though the band credit their years of gigging with giving them the life experience to write their debut album, ‘OK, I’M SICK’, it’s also had its downsides, especially for Katz. The singer and guitarist suffers from anxiety and panic disorder - something that he’s had to learn how to cope with on the road. “I once ran off stage mid-song and just had to take a beat and was very confused,” he says, offering an example of how the problem can affect him. “I wasn’t sure if I should be throwing up or sitting down. Typically, it’s just clenching every muscle in my body until it hopefully goes away. I can barely stand up, barely get notes out. It’s all of these feelings at once.”

It’s that problem that inspired ‘Ghost’, the band’s big breakthrough single. After coming home from tour, Katz was so fed up with what he had to go through to get on stage every night, he was in two minds whether to carry on with music. “If I’m miserable every night, why am I doing it?” he asked himself. It was that song, which reached the top of the US charts, that saved Badflower.

Despite its success, the group was initially sceptical about it being more than an album track. In its often graphic lyrics, Katz plays out a dark, suicidal fantasy - “This life is overwhelming and I’m ready for the next one,” he sighs resignedly at one point. They worried listeners would think they were glorifying suicide, cynically using a very real and serious problem for their own gain. “But people got it immediately and we realised how many people are affected by depression, panic disorder, and anxiety issues,” Katz explains. “You hear about it all the time, you see it on every commercial - there’s some anti-depressant being sold to you because everybody has these issues - but people don’t like to talk about it that much.”

While ‘Ghost’ is a somewhat harrowing take on mental health issues, not all of ‘OK, I’M SICK’ is as serious. Opener ‘x ANA x’ (inspired in part by Jimmy Iovine and Dr Dre documentary The Defiant Ones) tackles a similar topic but with a far more sardonic tone. An ode to the helpful qualities of Xanax, it’s eyebrow-raising, incredibly self-aware and rife with meta moments (in one breakdown Katz cheerily asks: “Hey, wanna see what happens when I mix Xanax, blow, and a MacBook Pro?”). Along with the constantly changing music - be it speeding up, stuttering almost to the brink of collapse, or weaving even more claustrophobic layers together - it adds up to something completely manic.

“The whole song is meant to feel like a panic attack - unexplained chaos happening within you,” Katz says. “We wrote that song together and then I took what we had to our house in the desert and stayed awake all night and, like a mad scientist, destroyed everything and chopped it up. I didn’t feel like it was manic enough. It’s making fun of anxiety but it’s also making fun of itself.”

As a band with plenty to say, mental health isn’t the only message Badflower share on their debut. ‘Murder Games’ is the album’s most intense and urgent sounding cut, metallic, guillotine-esque swishes entwined with a punishing guitar line that sets you on edge. Its lyrics speak about veganism (Katz has been vegan for four years) in uncompromising terms. “That’s gonna alienate our band like crazy,” the frontman shrugs, unbothered. “We think it’s something important that needs to be talked about so we’re gonna talk about it. It’s about getting the conversation started. It’s about getting people to look at it in a different way and not be so passive about the idea that something in society that you grew up hearing was right might not be as right as you think.”

‘Die’ also has the potential to cause controversy. Partly a damning assessment of Trump’s position on the environment (Morrow is keen to point out the President is not the only target of the song), it features Katz screaming the title as if his own life depends on it. But his sentiment is not what you might immediately assume. “It doesn’t mean, ‘Hey, go get murdered’ or ‘I’m gonna kill you’,” he clarifies. “It’s more all of those people who are so stuck in their ways, who are afraid of change and afraid of evolution, need to get old and die off so the next generation can come up and make some change and do something good.” Despite first appearances, it’s intended as a statement of progression. “We’re meant to move forward, not stagnate,” Espiritu notes.

Elsewhere, the album navigates subjects like abuse (‘Daddy’), depression in the face of success (’24’), and social media stalking (‘Girlfriend’). The latter merges old and new, layering lyrics about Instagram filters and the internet over a big blues-rock jam. “We’ve always wanted to write about that anyway,” says Katz, “and it was the perfect, wacky blues riff to write that over. I think we came up with something very special.”

Badflower’s focus might be on big conversations but that doesn’t mean they aren’t happy to turn their attention to less weighty subjects too. ‘Promise Me’ is the only traditional love song on the record but not even it can escape the band’s entrenched darkness. “That’s my proudest moment on the album,” Espiritu says. “We talk about doing what we want and what the spirit of rock and roll is, and then we have ‘Promise Me’, which is this leftfield, beautiful, romantic love song, and we’re able to spin it and make it our own.” The making it their own, Katz explains, involves one of the song’s characters meeting their maker.

Produced with Noah Shain (Atreyu, Dead Sara), ‘OK, I’M SICK’ represents a band full of ideas and submerged in the most modern of sounds. The band’s intention was to make the most 2018 album they possibly could, unfazed by the idea it could sound dated a few years down the line. “Timeless music is amazing but everybody’s trying so hard to make timeless music that they’re making vague, cookie-cutter shit,” Katz says. “It sounds like everything else and I don’t think there’s really many rock bands who are trying to write anything current. We wanted to make something for this generation.”

You might have realised by now this band isn’t one to limit themselves. “We don’t even consider ourselves a rock band,” Katz says defiantly. “If we decide to put out a rap album next week, we’re gonna do it. Watch us. We don’t fucking care. We do what we want. Rock and roll used to be about that spirit and that got lost somewhere.” You can count on Badflower to put it right back in the heart of things, whether anyone else likes it or not.
Dead Sara 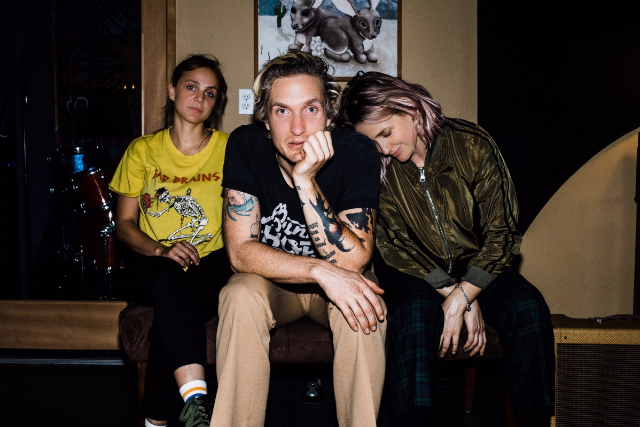