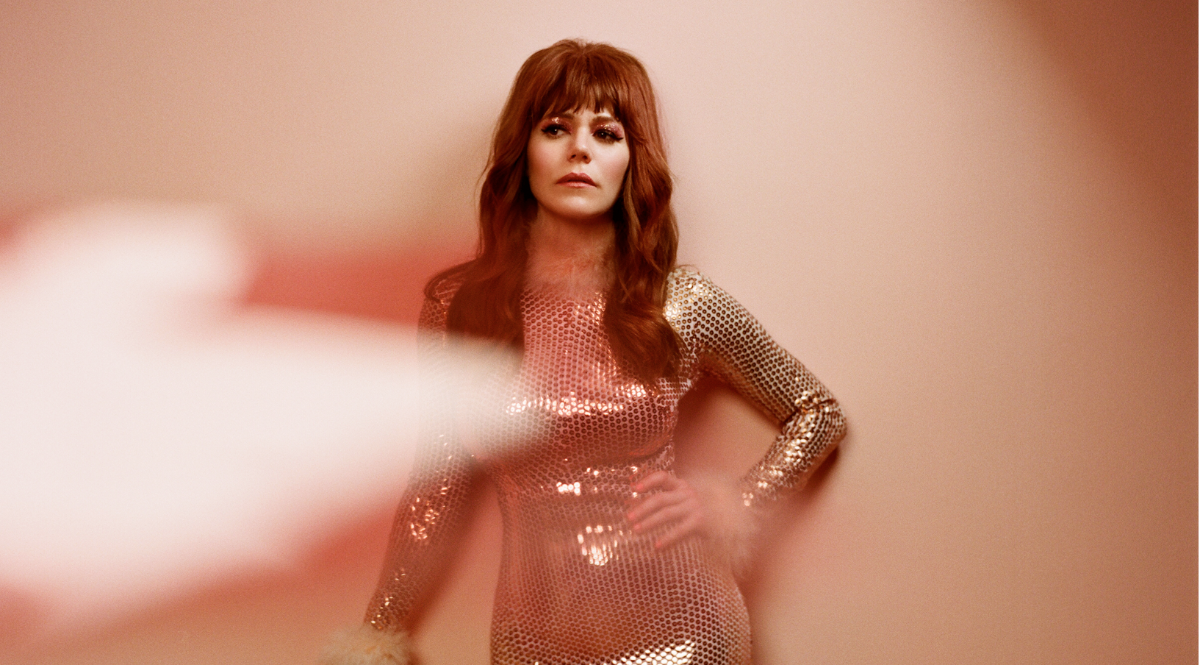 Get adv tickets starting wed may 1st at 10am at www.soulkitchenmobile.com or by calling 866.777.8932 or at Mellow Mushrooms (USA location). 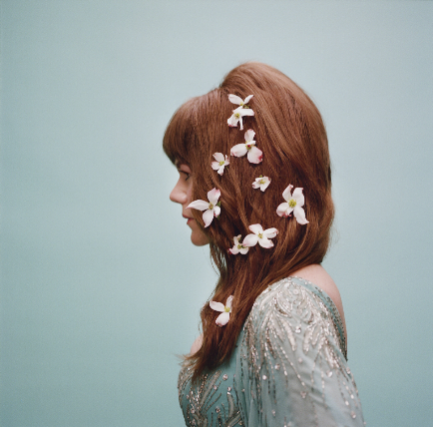 I’m going to guess that you feel the same way I do about Jenny Lewis. I love her music. Her songs, albums, videos, live shows, however you want to quantify her artistic output. I think I take for granted that basically everyone is a fan of hers. But then there’s this other thing that happens, and I don’t know if there’s a word for it. I hear her singing and I have this second realization that feels something like “No, wait. I’m serious. Her voice is incredible. This song is perfect.” While we try to come up with a term for this feeling, here are some things to know about her new album On The Line (*Interspersed with excerpts of lyrics from some of the album's songs).

On The Line is Jenny’s fourth solo album.
Jenny recorded it at Capitol Records, studio B, in Hollywood.
She sang in the vocal booth built for Frank Sinatra.
Shawn Everett mixed it.

Here are the musicians who played on the album:
Jim Keltner on drums.
Ringo Starr (!) plays drums on songs 1 and  3.
Double drums with Jim Keltner on song 3
(“They played together like the concert for Bangladesh!” says Jenny.)
Don Was on bass.
Jason Falkner also on bass.
Benmont Tench on keys.
Beck on guitars and keys on the tracks he produced. Vocals, too.
Jenny Lewis on piano guitar and vocals .

Says Jenny, “ at 41 years old,  it was the first time in my life that I felt like a bonafide professional musician"

“why are you lying ?
the bourbon's gone
mercury hasn't been in retrograde for that long , oh no
stop your hiding and drop that bomb
do you remember when i used to sing you this little song ?”
—“Wasted Youth”

Jenny says of Jim Keltner:
“I think his drums are the center of the record.
Supporting every phrase.
He's listening to the nuances of the stories. Waiting.
He's so intuitive and creative
and leaves so much space.
He's like father time.
The heartbeat of your favorite rock n roll songs.
We bonded musically. Immediately.
It's like I was floating on his rhythm.
My fingers on the keys held up by strings. Like a puppet’s fingers.
That's when you know you are playing with the world’s best drummer.
They make you a better musician.”

“on a Hollywood lawn today
slip and slide watching the kids play
you know that i love you, babe
dozing off watching the channels change
i've been searching for the heart to tell you something i could get down on my knees
i've had it with you trippers and drama queens
if i click my ruby slippers like Don Quixote
i'm long lost like Rockefeller
drifting out to sea”
—“Hollywood Lawn”

“i’m about to get wicked
you’ve got me lying on my back
hallelu!
all will be forgiven, but why you gotta act like that? make me beg for you
i'm wired on Red Bull and Hennessy higher than you
i'm on fire come on and get next to me i wanna ride with you
uh oh uh oh
i wanna ride with you
what's the matter with me?
i can see it in your eyes
after all we been through
don't you wanna kiss me?
don't you even wanna try to devour the moon?”
—“Red Bull & Hennessy”

On playing with Ringo Starr:
“You can hear the excitement in my voice and in the playing of the band on the Ringo tracks.
The energy in the room was palpable on the day he was there.
It's live music, so my voice cracks and sometimes the pitch isn't perfect,
but that's why it's alive!
It's flawed and heavy with humanity.
There was a lot going on in that room
in between takes the band talked Dylan
The band had all played with Bob. Wow!”

“took a little trip up north
in a borrowed convertible red Porsche
with a narcoleptic poet from Duluth
we disagreed about everything from Elliott smith to grenadine he fell asleep and i put up the roof
and he took me to a graveyard
i thought he'd kill me there
he kissed me on the corner while the nuns of harlem stared heads gonna roll, baby
everybody's gotta pay that toll and maybe
after all is said and done
we'll all be skulls
heads gonna roll”
—“Heads Gonna Roll”

“When we were listening to playback,
which we only did on the day that Ringo was there,
Ringo laughed at the narcoleptic line. Like, a big laugh.
I watched Ringo listen back to the song,
and when the Elliott Smith line came up, I just lost about lost my shit
Elliott was such an influence on my songwriting and he was a huge Beatles fan.
I knew Elliott a little. He was always so kind to me.
I felt so sad when he passed, like I could have helped somehow...
It was just too much to see Ringo vibing on a lyric about Elliott."

There were two events in Jenny’s life that, understandably, had an emotional impact on recording the album.
One was a recent breakup (“I burned a breakup candle while we tracked”).
The other was the passing of her mother.

“was it a dream?
under the holy cross in the valley below
a mother and child, emergency
behind a yellow curtain on the second floor
all the guardian angels at the door
with their long white coats and their stethoscopes in the middle of love
i'm the little white dove”
—“Little White Dove”

“I flew home and saw her for the first time
in a long long time.
They gave her 8 weeks
and almost to the day she passed.
I wrote Little White Dove
in and out of the hospital and nursing homes.
Standing above her bed. Walking down the halls.
Sitting in a chair that I dragged in from
the hallway. Asking her for harmony ideas,
we would sing together.
We listened to Time Out Of Mind a lot together.
She would say, what is this? I love this!
I’d say it's Bob Dylan, ma!
She'd say, he’s a heavy cat, kitten.
She passed on October 13th. Friday the 13th.”

At this point, Jenny invited Beck to work on the album with her.

“I texted Beck my new songs
that I had been writing in and out of the hospital,
(as well as) Rabbit Hole and Do Si Do,
which I wrote for a friend who had gone off their psych meds.
I knew he'd understand the tunes.
He's a friend and mentor.
We both grew up in L.A.. We share a lot. Geographically, musically.
I think we are both shape shifters, record collectors,
and genre jumpers."

“turn up the stereo till everything rattles, ooh life is a disco, a mambo
put on your day glo
do si do
ooh, do si doh
make a grown man cry
it's suicide
my oh my
powerful minds and suicide my oh my”
—“Do Si Doh”

“We went back to Capitol, this time with Beck at the helm.
Jason Falkner on bass, Jim on drums, and Benmont,
who had just become a father and
just after Tom Petty passed.
Again, heavy vibes in the room.
Tom was gone and so was my mom.”

“Thank god I was in that iso booth!
I would kneel down
and wipe away the tears
with my bandana between takes.
I don't think they saw me. I just couldn't wrap my head around how Ben was feeling,
losing his bandmate of 40 years.
He showed up to my session
and played fully.
Thank you Benmont!”

I’ve listened to the album, and the experiences described here are present in the sound and  the songs. Maybe I feel closer to it, now that I’ve heard what it was like behind the scenes.
Or maybe I’ll pretend that I knew these stories all along. I think that’s allowed.
I’m not sure I like it when liner notes say “play this LOUD”. Why does that mean it’s going to have more of an impact on you?  I say, play this album at whatever volume seems right in that moment. I listened on my computer in a hotel room in Santiago, Chile, and was thoroughly moved.
Also, this is Fred Armisen writing this.
Thank you!

“oh, in the springtime in a little house
i never told you i had my doubts
somewhere a screw got loose along the way
and our manners have gone away
and i believe that there will come a day
i believe that you will chase me away
so that you can prove love is not enough for you
you thought i was your muse but all along it was you”
—“Dogwood”