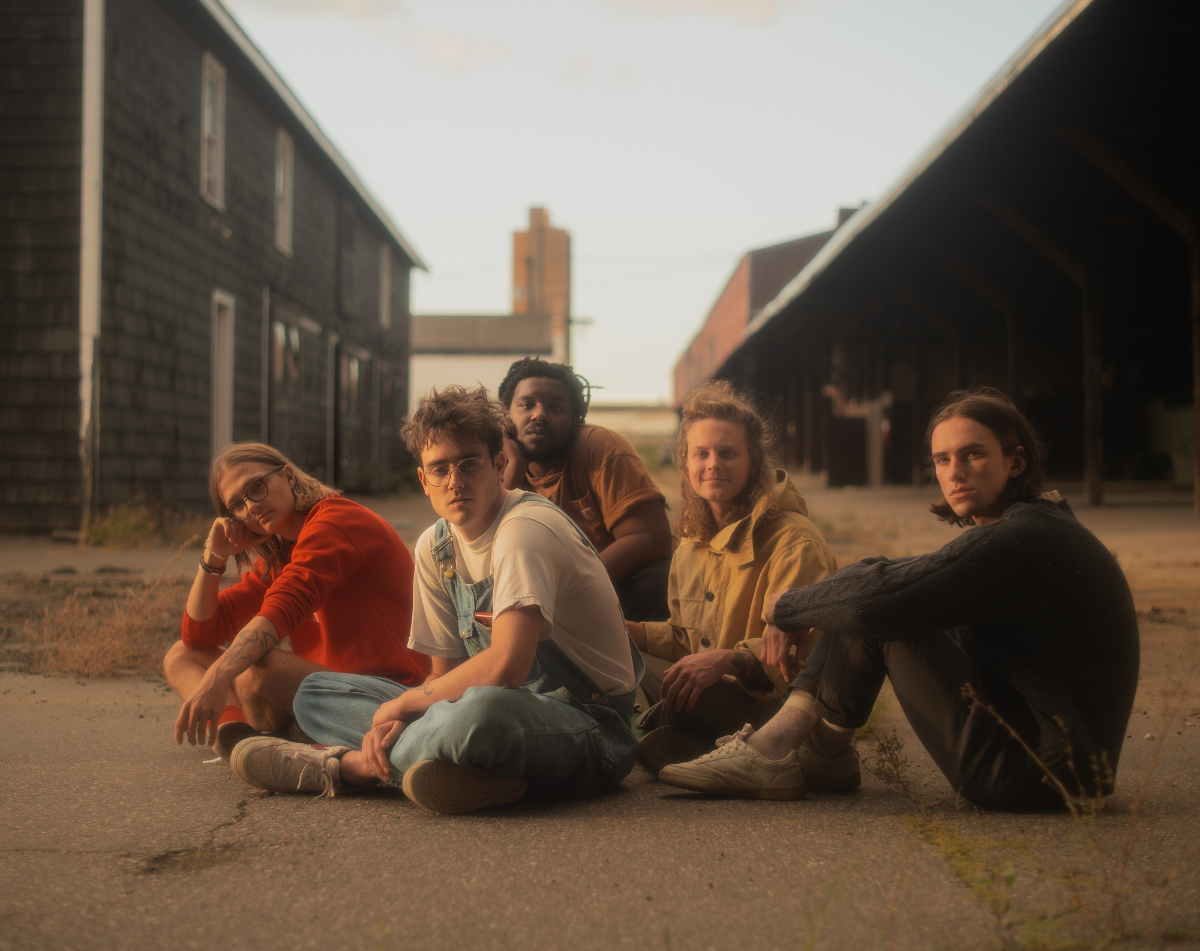 Get adv tickets starting Friday April 29th at 10am at www.soulkitchenmobile.com 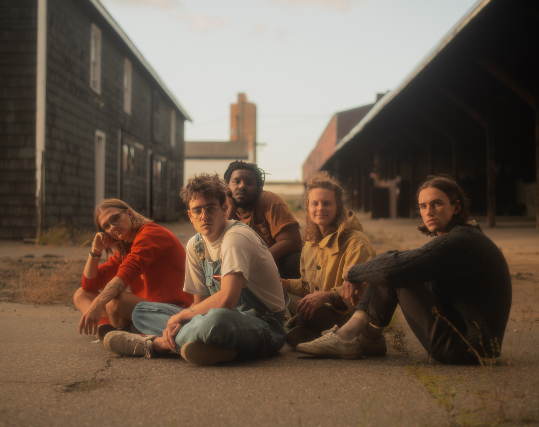 In the years between 2018's BAMBI and LP3, Minneapolis' Hippo Campus -- made up of vocalist/guitarists Jake Luppen and Nathan Stocker, drummer Whistler Allen, bassist Zach Sutton, and trumpeter DeCarlo Jackson -- has grown up and into itself. Although the five-piece has been friends since middle school and put out a number of studio releases since its inception, it's the new record, LP3, that's the most honest portrait of who Hippo Campus is.

It's also a study in the nuances of growing up -- coming to terms with mortality, the confusing journey of sexuality, bottoming out, seeing decisions from the night before in the harsh morning light; finding your identity as a person and as an artist -- how that can be a collision of elation and shame, painful and joyful all at once.

LP3 marks a sort of ego death -- and ultimately feeling okay with that. So much of LP3 was written in the chasm between grappling with the value of your own art and the larger, chaotic context of the world. It traverses the end of relationships, of careers, and the chance of meeting yourself as a brand new person. If you take the signifier of "musician" away, what does it mean? And how do you expand your identity outside of work? Here, it's something the band works through. And, in the end, it happens with the same ride-or-die crew at your back to hold you down -- or up -- the entire time.

Over the last few years, the Hippo universe has expanded outward. Luppen and Stocker both put out solo records as Lupin and Brotherkenzie respectively, and the two also teamed up with Caleb Hinz to put out the debut Baby Boys record while DeCarlo Jackson founded, and collaborated with multiple bands around the Twin Cities, including DNM, Arlo, and FPA. Navigating solo projects and new dynamics and the spotlight alone is humbling, bringing up new insecurities and defense mechanisms. It was challenging in its own way to branch outside of Hippo -- and it made the eventual return to the project feel like coming home.

Here, Hippo Campus killed what they knew and started again. Death, in all its metaphorical and lyrical forms, looms across the record. Album opener "2 Young to Die" sets this up most explicitly, the push-and-pull of simultaneously weighing mortality and invincibility, of youth, of wanting to kill parts of yourself and be born anew; "Bang Bang," a fan favorite from the live set, explores the death knell of a long-time, fizzled-out long-distance relationship, while "Blew Its" captures the same chaotic burst of energy in Maggie Nelson's prose-poem book; and "Semi-Pro," a pop gem, explicitly charts the death of a career, the meaningless of fame, how dreams change.

What Hippo Campus wanted with LP3 was something all five of them could agree on, the way they'd made music in the early days of the band. As their profile grew, they found themselves compromising on their visions, thinking about how fans would interact with their music, and plagued by an unsustainable industry ecosystem. Now, they just wanted unity.

Luppen explains: "Songwriting-wise, we wanted to place a priority on more personal lyrics and more self-referential storytelling as opposed to larger concepts like we did on Landmark and Bambi. In that way it's similar to what we did on the [Bad Dream Baby] EP, but in a more earnest way. The priority was on finding the feeling that we had in the early days -- when we were really happy making music, you know."

"There's so much insinecre bullshit in this climate that's making everything more and more confusing," Stocker adds. "So being able to distill something down to what it really means in a way that's really accessible and honest and earnest was definitely, definitely the goal."

They also give enormous credit to producer Caleb Hinz (Baby Boys, Samia, Miloe) for his hand in shaping the album. A rising St. Paul producer and another friend since high school, Hinz is a relatively new name in the studio, but someone who ultimately had the biggest influence. He put long hours into the record, and left his fingerprints all over its production -- the distorted drums on "2 Young to Die," the drumkit on "Boys" crafted on a literal trash kit of garbage cans, pots, and pans, or "Listerine," where Allen was playing inside of a makeshift blanket fort. Aside from his experimentation and long hours spent tinkering with the sounds, he also served as a rallying call for the band, pulling them back on track, an encouraging and confident force who helped shepherd the band into the best version of itself.

Luppen also explains it was the first time Hippo Campus, as a concept, got to be "dead." There was an open timeline, no tour lined up, no necessity to lean into the grid -- just breathing room, and the experience of their last five years as a band naturally exposing itself. The five-piece wrote somewhere in the ballpark of 35 songs for the record, the most they'd written for an album since their debut, Landmark. They joke that it was a return to form in "quantity over quality" -- but in a way, it's true. They had the time to simply write, to expel a sonic catharsis, and then use their honed, incisive editing tools to put the best ten songs on the record. "It's finally the album that we always admired from other artists," Stocker says. "It's just airtight."

LP3 is, then, their strongest and most complete work yet -- a freshly-inked portrait excavating young adulthood and identity and, more importantly, how that personal identity fits into a larger camaraderie. It looks at how growing up can just feel like something that's always moving past you when you're trying to grab a hold of it; it's a push-and-pull of letting go or holding tighter -- and figuring out what matters the most. Through cinematic, sonic clarity, LP3 is a sweeping account of courage and tenacity; tender-hearted stumbling that leads you on the right path after all.

When you think of all things Pink, a sound that fuses the likings of Basement Jaxx, the Gorillaz, CSS, and Tom Tom Club, with lyrics focused on “women empowerment” and re-defining the definition of “kawaii” or cute in Japanese, you think of CHAI.

Formed in 2012, in the Nagoya region of Japan, identical twins Mana (voc/keys) and Kana (gt./cho.) would ask fellow high school classmate, Yuna (dr./cho.), and later Yuki (ba./cho.), a college acquaintance, to join what we now know as CHAI.
Both independent releases, “Hottaraka Series” which translates to “irresponsible series”, was the title of CHAI’s 1st EP released in December of 2016, soon followed by “Homegoro Series”, their 2nd EP, released in April of the following year.
CHAI scored their first US performance at SXSW 2017, followed by a series of performance dates in New York, Chicago, Seattle, Portland, San Diego, San Francisco, and Los Angeles, a mini American tour titled “Japan Nite.”